If you’re looking for a foot spa, chances are you’ve considered a Conair.

Conair operates at the lower end of the foot spa market; sure, they don’t have all the fancy jets, or impeccable heating capabilities, but they are good foot spas in their own right and make make our list as one of the best foot baths for the money. You can find more top rated foot spas here.

And with all their spas coming in relatively cheap, that’s to be expected; for the money, they offer great value, but they obviously fall short when comparing their performance with more expensive models – you get what you pay for.

If you’ve never had an at-home foot spa and you’re uncertain how much use you’ll get from of it, any model in the Conair range would be a starting point. Every machine they make does its job, and there’s a reason the Conairs are amongst the best-selling foot spas on the market.

Recently, we were lucky enough to test out three of the most popular Conair foot baths, and today we’ll be sharing our unbiased thoughts.

According to Amazon, the Waterfall Foot Spa is a best seller, so we were curious to find out why.

First up, this foot spa looks good — the color scheme is easy on the eye, and it looks reasonably well made. It also looks big, so even large feet can fit comfortably inside. Because the price is on the affordable side, we were worried the machine would look a little tacky, but it actually looks really good — no complaints here.

Next, the features. The Waterfall model does have a heater, but it could be better. When we test out the top-of-the-range foot spas, we can all try it out without the water going cold, but with the Waterfall this wasn’t the case; we had to refill the basin with hot water several times. Really, this heater is only good for prolonging the speed at which the water cools, giving you longer to enjoy the spa. I don’t think it could ever heat water from cold, but it’s not supposed to.

Now for the bubbles, and this is where the foot spa really started to win us over. The bubbles are relaxing, and would help anyone unwind. However, we were all in agreement that the headline feature on the spa, the Waterfall, was its major selling point. The spa sucks up water and then trickles it down onto the tops of your feet, hence the name “Waterfall”. I found this to be incredibly soothing, and I’d like to see this feature on more foot spas.

The spa also has a few extra features thrown in. It has a pumice stone for exfoliating; it has rollers for massaging the arches; and it has a circular massager which rotates when you apply pressure to it. Overall, we were quite impressed with the range and depth of feature. The spa also has a lighting feature which, while providing no real benefit, does look rather nice! With the water bubbling away, the flickering lights definitely made the experience more sensual.

The best thing about the Conair Waterfall though, is the price. At this price, you won’t find a better foot bath! When you consider all the features on the spa, it really is a bargain.

Overall, we were really pleased with the Waterfall Foot Spa. There are better-performing spas out there (such as the Brookstone, or the Hot Spa), but none of these represents such good value for money. 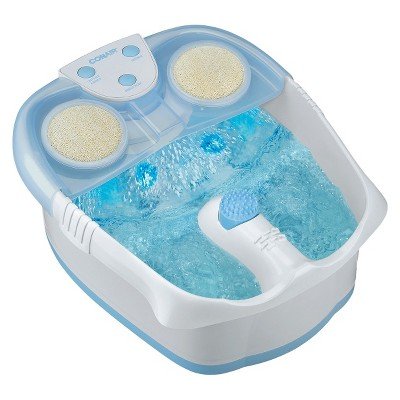 The next Conair model we tested was the Bubble Foot Spa. This is a more basic model than the Waterfall, and as such comes in a little cheaper than the previous mentioned Conair mode. At this price, we weren’t expecting much, but actually it performed very well.

This foot bath comes without any bells and whistles, but we still found it to be functional and relaxing.

It looks quite basic, but the color scheme is clean, and it doesn’t look too flimsy. It has only one button on it, and that is to activate the bubbles and heat.

First up, like with the Waterfall, the heater isn’t much use — it won’t keep the water steaming, but it will allow you to enjoy a soak for longer. The bubbles were very nice, though. Being on the cheap side, we were apprehensive beforehand, but the bubble function was the same as the Waterfall’s bubble function, albeit without the waterfall on top. For anyone looking to relax and relieve some tension from your feet, a soak in the Bubble Foot Spa would definitely be beneficial.

At this price you really can’t complain. In fact, at this price, I’d be very happy with my purchase, so hats off to Conair!

Would I pay just a little extra to upgrade to the Waterfall, though? Definitely — it just has a bit more to it. 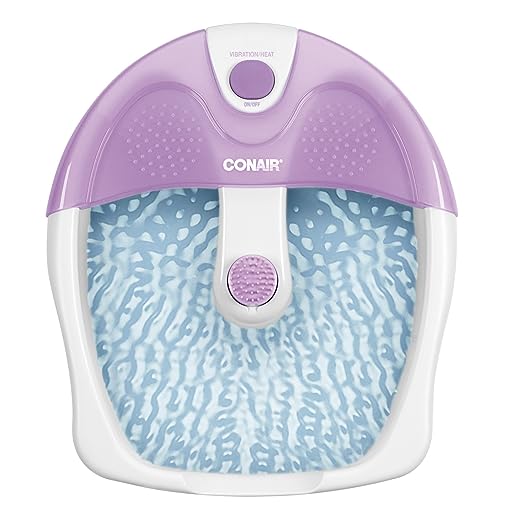 Finally, the wildcard of the three models we tested, the Conair Vibrating Foot Spa. This was actually the cheapest spa in the Conair range we tested. Honestly, at this price, you won’t find a better experience!

The vibrating model looks very similar to the bubbling model, albeit with a slightly different color scheme. Ours was pink, and we had no complaints with how it looked (though some men might disagree!).

The complaints with the heating element from the Waterfall and the Bubble persist. The heater is not particularly powerful, but it will prolong your soak.

Of course, anyone investing in this model is primarily interested in the vibrate function. We tested it out and were all pleasantly surprised. Personally, I found the vibrations to be nice and soothing, and definitely helped to ease the tension I carry in my feet. Whilst there are no jets, the vibrations inevitably disturb the water, giving it just enough motion to excuse the lack of a jet.

Finally the price: Wow. At less than the cost of a foot massage you really are getting staggeringly good value.

Having tested out three of the foot spas in the Conair range, we feel qualified to cast our opinion.

Now, of course they aren’t perfect, but when you purchase a Conair you’re getting a well-made, functional foot spa. For the price you pay, there really are no better alternatives. We found all three spas offered a relaxing experience, and, the waterfall feature in particular, was something you’d find on more expensive foot spas.

The major disappointment was the heating elements. I’d like to see a bit more power offered in any future models please, Conair!

As you’d expect, Conairs can’t compete with the top end foot spas, but for those of you working to a budget, we wholly endorse Conair.