If you’re anything like me, you like a foot spa that’s deep — nothing beats the feeling of sinking my feet into a good, deep foot spa at the end of a long day.

With this in mind, you can understand my excitement when I was asked to test out a foot and leg spa!

Although more of a calf spa than a full leg spa, my excitement was no less palpable when the FootSmart Foot and Leg Spa Massager finally arrived.

Want to know how I got on with it? Read on. 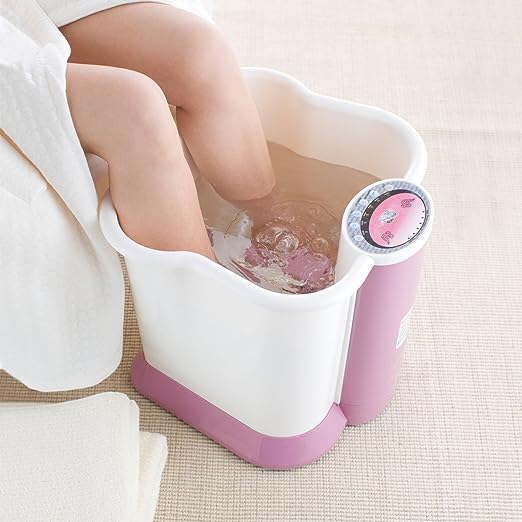 Having reviewed countless foot spas, which you can read about here, the first thing that I noticed was just how huge this thing was.

The FootSmart is a full 14 inches deep, meaning it dwarfs every other foot spa on the market in 2015. If you want to take the strain from your ankles or calves, really no other spa can compete. This foot spa comfortably held water that went half way up my calf.

But it wasn’t just the size that impressed me: the all-round appearance was nice. The pink and white color scheme complemented each other well, and there was an electronic touch pad on the top which looked impressive.

A common criticism of foot spas is that the heater can’t keep the water hot. Generally, the heater is only effective enough to prolong your soak by keeping the water warm for longer.

Because the FootSmart holds a whole lot more water, I was slightly concerned that the heating element wouldn’t be up to the job.

How wrong I was!

Obviously the extra water has meant FootSmart have included an extra powerful heating element to handle it. This heater is great.

The comforting experience at a foot and leg spa is great for relaxing the whole body. The well maintained temperature of the water with a hot water heater is the best thing here! While the legs soak in the warmth, the strained muscles slowly find their place back. It also helps clean the foot which feels amazing. A good spa facility always ensures that the hot water heater is powerful enough to keep up the heat throughout the process. You can easily distinguish between the ones you want to visit again and again.

It is easily activated by playing with the buttons on the top of the spa, and impressively you can set the temperature. Many rival spas only have an “off” or “on” switch, so being able to set your preferred temperature was a nice touch.

The heater can easily keep water hot, and is even capable of heating water from cold — something I’ve only ever seen on the Brookestone Massaging Foot Spa.

In fact, when testing out the heater to its limits, I actually had to turn it off — the water was starting to get too hot.

Anyone that’s read our other reviews will know: that’s never happened before. That meant the FootSmart heater got a huge thumbs up from me. Quite simply: it’s fantastic. 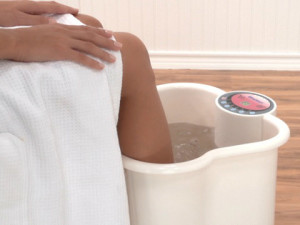 The FootSmart comes with two reasonably strong water jets. When switched on they are great at circulating the water and creating a nice bubbling effect.

Other foot spas have created way more bubbles, but nevertheless I was still impressed.

The flow of the water jets was very soothing, and if you position your muscles close enough to the jets they can even give you a pretty decent massage.

As well as the “massaging” air jets, the FootSmart leg and foot spa also comes with a few extra massaging features.

Activate another of the buttons on the top of the spa and you’ll switch on the vibration functions. This is less intense than some other foot spas I’ve tested, but the gentle buzzing vibration was still highly relaxing.

If you have chronic pain in your feet, the vibrations are gentle enough not to aggravate it, but strong enough to ease some of the tension away.

There’s also several rollers at the bottom of the basin. Put pressure on these and you can give the arches of your feet a pretty decent massage. I had no problem with these, but they do look rather flimsy — if you use the spa regularly, I wouldn’t expect them to last too long. If you’re really looking for a foot massage check out this article.

We usually dedicate a space in our reviews to discuss the spa’s other features, but the FootSmart doesn’t come with the usual pumice stone and exfoliating brush.

With everything else functioning so well, I was happy to let them off with this. The rolling nodes were effective, and the all the different settings gave a variety of experiences, so I didn’t miss the little extras much at all. 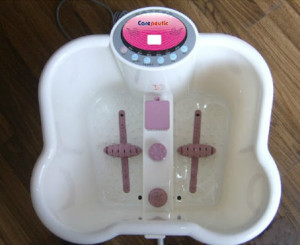 Last up, the price.

The  price tag is not to be sniffed at, but when you consider you’re getting quite a unique concept — executed fantastically, might I add! — then this is definitely justified.

Everything works as it should, and because the spa is considerably bigger than the other foot spas out there, I think this price tag is very fair.

It’s not the cheapest, but it’s worth every penny.

Overall I thought this spa was amazing — I absolutely love the leg and foot spa concept.

It lacks some of the bells and whistles of rival foot spas — you won’t find any pumice stone here — but really, it doesn’t need them at all. Many other spas throw in loads of extras to make up for the actual spa’s shortcomings.

This spa just doesn’t need them.

The depth of the spa is perfect if you want a little bit more than your feet soaking, the heater is without doubt the best heater I’ve tested and the jets and massage settings create a very relaxing experience.

Simply: one of the very best foot spas I’ve ever tried.

Looking to purchase the Foot and Leg Spa Bath Massager?