Too much anticipation often leads to disappointment — how can anything live up to unrealistically high expectations?

With Helen of Troy making a point to talk up their Hot Spa’s versatility and the impressive heat feature, we were all very eager to try it out.

Thankfully, the hype was justified and the spa really did deliver — to the point that we actually voted it a close second to the Brookstone Aqua-Jet in our best foot spa of 2015 award.

Want to know more about our experiences with the Hot Spa Ultimate Foot Bath? Read on! 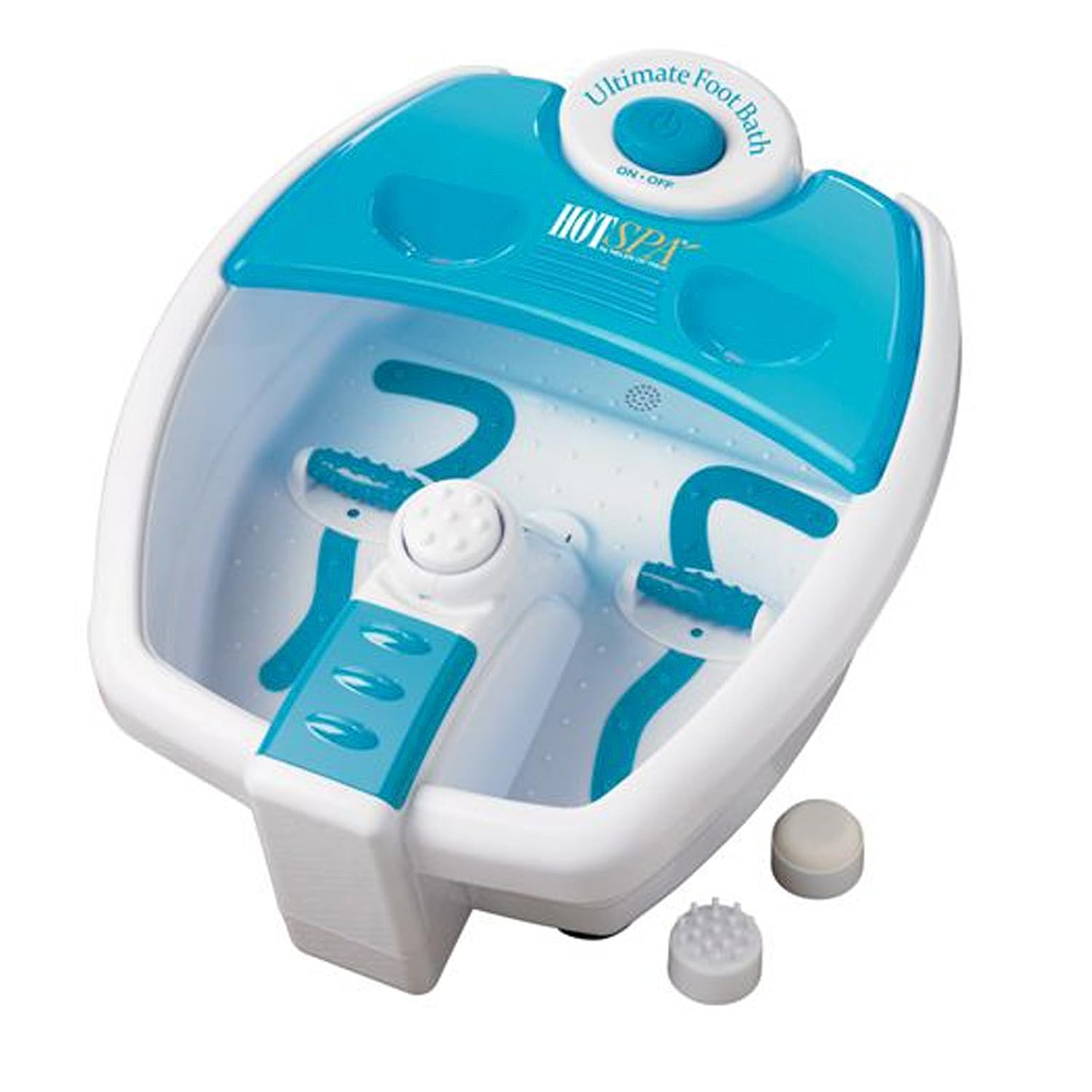 Our first impressions of the Hot Spa were good; when we lifted the machine from the box everyone seemed pleased. The blue and white color scheme looks clean, and far better than the offerings from other manufacturers.

Importantly, it looks well built. If you want a foot spa to provide you with some decent mileage, the Hot Spa won’t disappoint.

Testing out the size produced mixed results. The majority of us were perfectly happy — but then most of us have smallish feet! There are bigger spas on the market, but I’d definitely describe the size as “sufficient”. No complaints there.

The depth was a different matter though. Really, a foot spa should be nice and deep, allowing you to fully immerse your feet. In all instances, too deep beats too shallow. Now, the Hot Spa isn’t exactly shallow, but it isn’t exactly deep, either. It didn’t ruin the foot spa experience for us, but we all agreed we’d like it to be an inch or two deeper.

With a name like Hot Spa, we were all expecting to be wowed by the foot bath’s immense heating power. Good news: It passed the test.

The heating capabilities of the Hot Spa are impressive, no doubt about that. Would you want to use the spa to heat up water from cold, though? Probably not.

The heating element kicks out a good amount of heat, but it’s not as strong as the Brookstone Aqua-Jet heater. That’s not really a criticism — the Brookstone heater was exceptional — but shows there’s room for improvement. To avoid burning your feet, most foot spa heaters aren’t capable of heating water from cold, so don’t let this put you off the Hot Spa. I’ve always filled my foot spas with hot water, anyway, so this is something of a non-issue.

The Hot Spa certainly has no problem maintaining water temperature, though. We tested it for over an hour, and by the end the water was still steaming hot; really, that’s all you can ask of a heated foot spa. 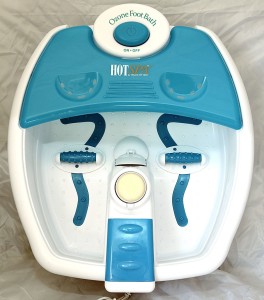 The Hot Spa has four settings to take you through.

First up there’s the Infrared Heated Massage setting. After a few minor disputes, it was nice to all be in agreement on something: this setting is awesome! When selected, the machine begins to vibrate intensely — I pressed my feet down and could feel the tension lifting, almost immediately. The infrared heat is a nice touch as this really helps the muscles in your feet to relax, giving you extra relief. If you like a foot massage at the end of a long day, this setting will be your new best friend!

After blasting the tension out with the massage setting, you’re going to want to relax; the Bubble setting is perfect for this! I’ll be the first to admit, I was a little disappointed when my turn in the spa came to an end — you could spend hours soaking and relaxing. The effect of the bubble setting is certainly enhanced by mixing in your own salts and soaps.

Next there’s the Water Jet setting. This created a nice soothing sensation, but the jets probably aren’t powerful to relieve much tension. Consider this your warm-up and cool-down setting.

Finally, there’s the Soak setting, although any normal person would call this “off”! We all had a chuckle when we realized what this setting was, particularly as Helen of Troy make sure it’s well-publicized that the Hot Spa has “four settings”. Because we loved the first three settings, we are prepared to let Helen of Troy off with this, though!

As with many other foot spas, the Hot Spa includes a “rolling node” on either side of the basin. You can move your feet over these for a kneading massage, particularly useful for focusing on the arches of your feet. We’ve always been rather disappointed with the rolling nodes on other foot spas, arguing that they don’t come anywhere close to providing a proper foot massage. The Hot Spa’s rollers aren’t perfect, but they were amongst the most effective that I’ve come across, and I could feel the benefit from using them.

The Hot Spa also includes three attachable, erm, attachments. There’s an exfoliating brush, a pumice stone (a more intense exfoliator), and a circular massager. Now, this in itself isn’t groundbreaking — many other spas include the same three attachments — but click one into place, apply some pressure and the attachment begins to rotate. It’s great to see the foot spa doing the hard work so you don’t have to.

Last but not least, there’s an “area” (for lack of a better word!) for you to put your own salts, soaps, or oils in. After being disappointed that you couldn’t add your own products with the Brookstone, we were all very grateful Helen of Troy encouraged this — without the aroma of your own foot soak mixed in, using a foot spa just isn’t the same.

Having looked at the Hot Spa in great detail, our attention turned to discussing whether we thought the spa represented good value.

Without doubt, it does.

The Hot Spa isn’t the cheapest foot spa on the market, but when you consider it comes in at comfortably in the double digits price, you are getting fantastic value. With all the features it possesses, you really do get a hell of a lot of bang for your buck!

Overall, the Helen of Troy Hot Spa is a fantastic product; really, only one other foot spa can rival it.

With several unique features (including the rotating pumice stone), Helen of Troy have clearly put a lot of thought into this machine. Whilst innovation is great, performance is ultimately what you pay your money for, and the Hot Spa doesn’t disappoint.

Put simply, if you’re looking for spa-like relaxation, but also love having your feet massaged, this foot spa is highly recommended.