Stepping out of a hot shower is often an unpleasant experience – even if your bathroom isn’t cold in the first place, the air in it can feel pretty chilly after showering.

Well, one solution to avoid shivering from cold is a towel warmer – once you try the warm embrace of a heated towel after a shower, you won’t be able to go back.

You could, of course, ramp up the heating in the bathroom, but this can be quite costly. On the other hand, warming up your towel with a towel warmer won’t increase your heating or electricity bill too much.

Towel warmers are available in many shapes, sizes, and styles. To help you avoid wasting hours looking through the hundreds of available options, we’ve compiled our top 5 of the best towel warmers out there.

Below, we’ll have a good look at these towel warmers to hopefully help you pick the right one. And to make your job even easier, we’ll also talk about a few things that you should be paying attention to when shopping for a towel warmer. 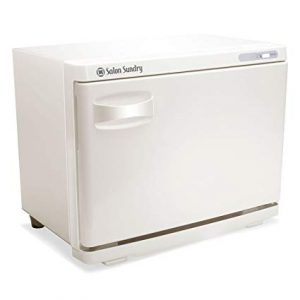 This towel warmer by Salon Sundry seems like a fairly nice unit for those on a budget. Despite its cheapness, this towel warmer still has a few interesting things to boast.

The Salon Sundry towel warmer also maintains an interior temperature of 176 degrees Fahrenheit, which should allow for pretty warm towels. However, keep in mind that this towel warmer takes about 30 minutes to heat up, which isn’t terribly slow, but nor is it fast.

Having a cabinet-like design, the Salon Sundry towel warmer is also mobile and may be placed pretty much anywhere. What this implies is that you don’t need to hardwire this towel warmer to your home’s electrical system, like you would need to do with rack towel warmers.

On the other hand, this thing will take up more space than a rack warmer, which is a thing to keep in mind if you have limited room.

Salon Sundry also boasts that its towel warmer has CE certification, but this probably won’t matter that much for US users – the CE certification applies within the European Economic Union. 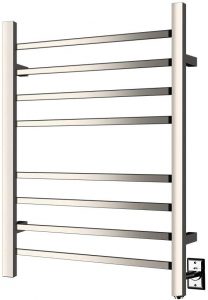 Perhaps most remarkably, the HEATGENE towel warmer has a sleek design – in our opinion, its rectangular tubes with no curves make this towel warmer a good addition to more modern bathrooms. Aside from that, your towels will be less likely to slide off the rectangular bars.

Being a bar towel warmer, the HEATGENE warmer requires mounting on a wall, which is certainly cumbersome. Setting this thing up won’t be as easy as with freestanding towel warmers. However, once the warmer is up on the wall, it will occupy much less bathroom space than a cabinet towel warmer would.

Notably, the HEATGENE towel warmer can be either hardwired to your home’s electrical system or be powered via a power outlet. Hardwiring will probably be the neater and safer option, but if you don’t have time for it, you may initially use a power outlet.

Temperature-wise, the HEATGENE rack towel warmer is designed to reach and maintain a temperature of 149 degrees Fahrenheit. This temperature should, on one hand, provide enough heat for quick towel warming or drying and, on the other hand, will probably reduce the chances of a fire.

One thing to keep in mind with the HEATGENE rack towel warmer is its long warmup – it reaches 149 degrees Fahrenheit in about an hour. This won’t be that big of a deal if you aren’t in a hurry, but it’s pretty long nonetheless. 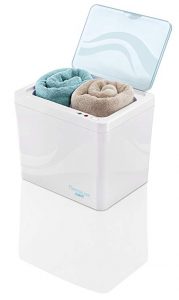 If you’d like to have a smaller cabinet towel warmer, then the Pollenex towel warmer might be a good option.

At the basics, this towel warmer is similar to the Salon Sundry towel warmer – both are portable, don’t require hardwiring, and may be used pretty much anywhere. However, a smaller unit, the Pollenex towel warmer will probably be a better option if you have limited space.

Aside from that, this little towel warmer warms up in about 20 minutes – which is decently quickly – and it also has an auto-shutoff feature to keep your towels and home safe.

We also didn’t mention that the Pollenex towel warmer is very inexpensive. And, of course, being a cabinet towel warmer, its setup is very easy

The one shortcoming of the Pollenex towel warmer is its capacity – it will take at most 2 large bath towels (40 x 70 inches, as claimed by Pollenex). This will probably be alright for showering, but if you are intending to use your towel warmer for drying, then this unit perhaps isn’t the right option. 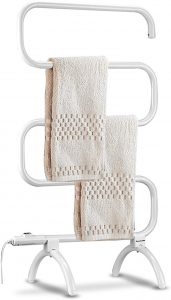 On one hand, like freestanding warmers, the Homeleader towel warmer is mobile and may be placed anywhere you want. On the other hand, it has a small footprint like a rack towel warmer and won’t take up much space.

With this in mind, this little towel warmer might be a more flexible alternative to the other towel warmers on our list.

Notably, the Homealeader towel rack has a pretty quick warmup. It is claimed to reach temperatures of 131-141 degrees Fahrenheit in within 30 minutes, which is pretty quick for such heat. And once the towel warmer gets to these figures, its built-in thermostat will maintain the temperature for increased safety and energy savings.

When it comes to downsides, the Homeleader towel warmer rack has two. First of all, it’s pretty small and won’t be able to take many large bath towels. Secondly, this towel warmer may have trouble with warming your towels uniformly because its heating bars are far apart. 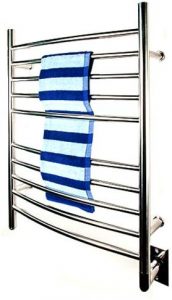 Finally, we have the AMBA RWH-CP towel warmer. If you are worried about longevity and durability, then this towel warmer may be the right option for you.

The most remarkable thing about this rack towel warmer is that it is rust- and tarnish-resistant, which definitely is a big advantage when you are dealing with humidity in bathrooms. The other towel warmers on our list should withstand humidity well, but the AMBA towel warmer will probably be unmatchable in this regard.

Notably, this rack towel warmer has a curved design – the crossbars curve out in the middle. This purely is an aesthetical feature, and it probably doesn’t have practical benefits, unless you want to keep your towels away from the bathroom walls.

What should also be noted is that the AMBA towel warmer has ten crossbars, which should allow for pretty even and quick warming.

And, of course, as a rack warmer, this towel warmer occupies very little room. With that said, installation will be a headache with this thing – you not only need to mount it on a wall, but it also only supports hardwiring out of the box. You’ll probably have to hire a contractor to set up this towel warmer.

Things To Look For When Shopping For The Best Towel Warmer

The reviewed 5 towel warmers sure seem great, but which one from them is that best towel warmer for your needs? To help you find out, let’s talk about a few important things to look for when shopping for a towel warmer.

To help you determine which towel warmer type will be the right option for you, let’s have a look at their pros & cons.

Each towel warmer type has its distinct advantages and disadvantages, but we can’t say that one is clearly better than the other.

For most people, the main criteria will be the ease of installation. Assess which type of towel warmer will be easier to install in your bathroom or kitchen and make a choice based on that.

As we’ve seen from our reviews, electric towel warmers can be either wall-mounted or freestanding. There also are floor-mounted towel warmers, but these aren’t as popular as the other two.

With that said, wall-mounted towel warmers can be pretty difficult to install. At the very least, you will need to drill holes in the wall and bolt the warmer in place. And if your wall towel warmer requires hardwiring, then you will have to hire an electrician for the installation as well.

Depending on how complex the installation is, you may have to pay a few hundred dollars extra on top of what you’ve paid for the towel warmer.

This is where freestanding towel warmers come into play. Although they don’t make your bathroom space more efficient, you can place a freestanding warmer anywhere you want as long as it is near a power outlet.

On the other hand, freestanding towel warmers consume a lot of floor space, which not everybody has.

It might also be important to consider what the desired towel warmer is made of.

Perhaps the most important thing to pay attention to is rust resistance. For permanent bathroom placement, your towel warmer should be rustproof, or it will go bad in a very short time.

But if you’ll be placing your towel warmer in the kitchen or other areas that don’t get too humid, rust resistance isn’t as important.

Aside from rust protection, with rack warmers, the material that your towel warmer is built from might impact its heating performance.

Rack warmers are usually made of steel, a material that heats up pretty slowly but retains heat for a good amount of time. Another popular material for rack towel warmers is aluminum. In contrast with steel, aluminum heats up quickly but doesn’t retain heat as well.

If you will be using your towel warmer for a long time – to dry towels or clothes, for example – then steel may be the better material. You may run a steel warmer for a little bit and then turn it off – the retained heat will then keep going for some time.

But if you will mostly be using your towel warmer for a short time, then aluminum might work better.

By the way, aluminum also doesn’t rust, so it might again be a good option for bathroom use. Steel can also be rust-resistant, but only if covered with a rust-resistant coating.

How many towels are you planning to warm/dry in your towel warmer?

If the answer is “many”, then look for a larger towel warmer. Otherwise, for just one towel, any towel warmer on the market should suffice.

Aside from the size, pay attention to how big the heating surface is in the desired towel warmer. This especially applies to rack towel warmers – if your rack warmer has a higher number of crossbars, it will probably heat up your towels more quickly and more uniformly.

If you want to take more control into your hands, then look for a towel warmer with an integrated timer. Depending on how functional the towel warmer is, this handy feature will allow you to stop the heating at an optimal temperature or to turn on the warmer automatically at set times of day.

And that’s it for our towel warmer buyer’s guide!

Hopefully, you are able to find that best towel warmer for your needs. We think that our 5 picks are a good place to start, but feel free to look for something else if none of the showcased towel warmers seem right for you.